[Additional Accordion to split up the Analysis Checklist]

[Additional Accordion to split up the Indicator Comments]

[Additional Accordion to split up the Indicator Comments]

Live birth - the complete expulsion or extraction from its mother of a product of conception, irrespective of the duration of the pregnancy, which, after such separation, breathes or shows any other evidence of life such as heartbeat, umbilical cord pulsation, or definite movement of voluntary muscles, whether the umbilical cord has been cut or the placenta is attached. A live birth is not necessarily a viable birth.

Infant mortality - death of a live born infant before the 365th day of life.

Mortality rates - based on deaths during the following specified periods:

Sudden infant death syndrome (SIDS) - the unexpected and sudden death of an apparently healthy infant. It is more often reported in infants between two weeks and one year of age, in preterm infants, and males. Also called crib death. ICD-9 code: 798.0. Note that some researchers use ICD-9 codes: 798.0-798.9.

Respiratory distress syndrome (RDS) - a respiratory disorder that occurs in newborn premature infants and is characterized by deficiency of the surfactant coating the inner surface of the lungs, failure of the lungs to expand and contract properly during breathing resulting in collapse; and by the accumulation of a protein-containing film lining the alveoli and their ducts. Also called hyaline membrane disease;

Congenital anomaly - a condition that results from an abnormality of structure, function or metabolism in one or more parts of the body, with potential to adversely affect health, development or function. Anomalies are present at birth and may be inherited genetically, acquired during gestation, or inflicted during birth. Also called a birth defect.

Intrauterine Hypoxia (IH) - occurs when the fetus is deprived of an adequate supply of oxygen. IH is used to describe inadequate oxygen availability during the gestation period.

Birth asphyxia - (also refered to as perinatal asphyxia or Asphyxia neonatorum ) can result from inadequate supply of oxygen immediately prior to, during or just after delivery. 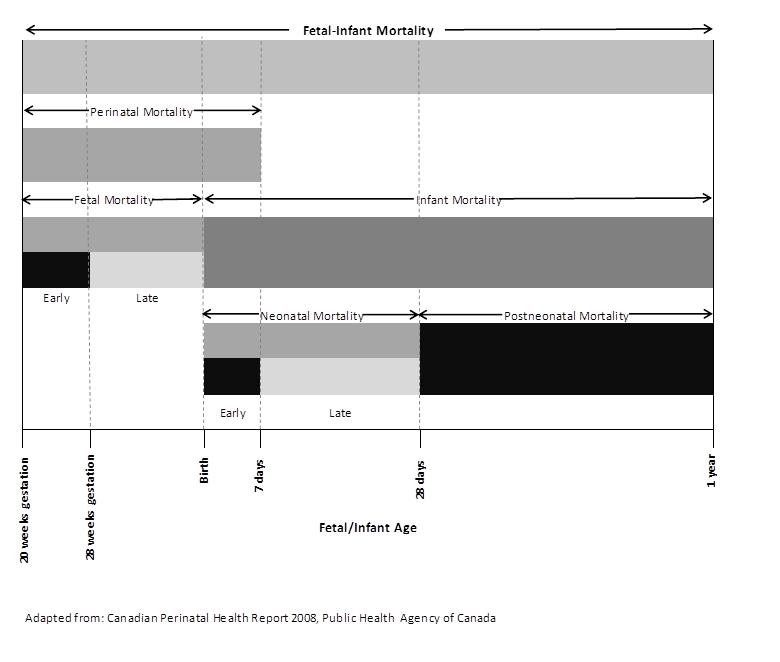 This Core Indicator Product webpage is maintained by the Reproductive Health Subgroup.
APHEO's Core Indicators Project has been developed through collaboration across the field of public health in Ontario,
to provide standardized methodology for population health assessment, to measure complex concepts of individual and community health.
Please contact core.indicators@apheo.ca for further information.